Amy Johnson, CBE, (1st July 1903 – 5th January 1941) achieved global recognition in the 1930’s through her numerous world record-breaking flights achieved at London Airport, Croydon.  Johnson was one of the most celebrated personalities of the decade and became a leading role model for women’s equality across the globe.  She was at the forefront of a group of record-breaking women aviators operating from London Airport, Croydon, including Dame Mary Bailey DBE and the Honourable Mrs Victor Bruce.

Amy was born in Kingston-upon-Hull and graduated from the University of Sheffield in 1925 with a Bachelor of Arts degree in Economics. Following her degree, Amy took a course at a secretarial college. Moving to London early in 1925, Amy took a short term job as a sales assistant before taking up a position as a secretary with a solicitor’s practice. During this time she enrolled for a series of flying lessons at Stag Lane Aerodrome, home to the De Havilland aircraft factory. Continuing with her lessons in her spare time and as funding would allow, Amy gained her pilot’s “A” Licence, No. 1979, on 6th July 1929 at the London Aeroplane Club, Stag Lane. In December 1929, Amy also became the first woman in Britain to obtain an aircraft Ground Engineer’s “C” licence, enabling her to maintain aircraft engines.

Amy was keen to pursue a career in aviation but there were many barriers to entry. Primarily, the greatest hurdle for her to overcome was the prejudiced view, held at the time, against women becoming professional pilots. Inspired by Bert Hinkler’s record-breaking flight to Australia, Amy set out to beat his 15 1/2 day record flight time. It was a very ambitious undertaking. Given that Amy was an inexperienced pilot who had only just gained her private pilot’s licence with just 85 hours flying experience in her log book, she also had to navigate half way around the globe across some of the world’s most inhospitable terrain. Coupled with her inexperience, the other great test of the flight was one of endurance. Long distance flights against the clock were a battle against fatigue and exhaustion.

Amy’s plan to beat Hinkler’s record was to take the most direct route possible to Australia. The resulting shorter track miles would produce a faster overall flight time. Amy hoped to shave two days off Hinkler’s record and arrive in Australia after 13 days.

Persuading her father and Lord Wakefield to fund the project, she purchased a second-hand de Havilland DH. 60 Gipsy Moth G-AAAH and named it “Jason”. The aircraft was the most popular training aircraft in production at the time and the same type on which Amy had received her flying training.

On the evening of 4th May 1930, Amy flew her Gipsy Moth “Jason” from Stag Lane Aerodrome to London Croydon Airport, ready for an early start the next day. She stayed overnight in the Aerodrome Hotel adjacent to the airport, in a room at the front of the hotel. Amy found it difficult to sleep that evening, complaining of the traffic noise from the Purley Way by-pass.

On the 5th May 1930, Amy departed London Airport, Croydon, to set a new record solo flight time to Australia. A virtual unknown, the flight was seen off by little more than a dozen people.

By the time Amy had reached Karachi she had set a new world record flight-time to India. Britain was entranced by the determination of Amy and she was front page news. Despite adverse weather and aircraft technical problems, she battled on and arrived at Darwin, Australia on the 24th May, 19.5 days and 11,000 miles from Croydon. Amy had set a world record as the first woman to fly solo to Australia. 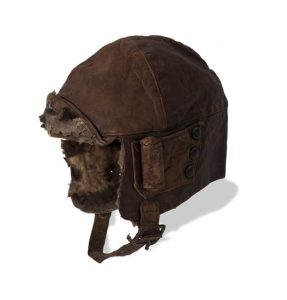 Amy Johnson’s helmet, which was donated to Croydon Airport Society by her sister Molly Jones

The flight was very challenging, beset by aircraft technical problems, poor weather, aircraft damage and administrative delays. It was an exceptional effort on Amy’s part and was a triumph of perseverance, determination and endurance. Amy did much of the aircraft maintenance work herself which added to the long, tiring, days of flying and further sleep deprivation. The brief details, shown below, of the twenty days flight, demonstrate just how long some of the days of flying were and how difficult a task it was to fly to Australia. The world map has changed substantially since the 1930 flight, and the locations recorded below are a reflection of the places and countries as identified at the time:-

Day 17- 21st May- (No flight as aircraft engine required parts)

Amy’s journey didn’t end in Darwin. After a day off from flying, during which she made public appearances, she continued her flight down the eastern coast of Australia to Sydney; with more public appearances at each stop. By this time she was completely exhausted and fatigued but still had a promotional tour to complete as part of the contractual obligations made during her record-breaking flight. Eventually, she received a medical examination and was ordered to take a much needed rest. Amy’s tour in Australia ended on the 7th July when she boarded the P & O mail ship, Naldera,  heading for Port Said, Egypt. Arriving in Port Said during the last week of July, she began the air journey back to the UK as a passenger with Imperial Airways.

Amy arrived back at London Croydon Airport on 4th August 1930 as a national heroine. 200,000 people flocked to the airport to welcome her home and watch her arrive in an Imperial Airways Armstrong Whitworth Argosy airliner “City of Glasgow“, Captained by Jimmy Youell. The flight was expected to arrive at 6pm from Vienna but was delayed by three hours due to bad weather en-route. South London came to a standstill as an estimated one million people lined the 12 mile route from London Croydon Airport to the Grosvenor House Hotel in London.

Whilst in Australia, Amy was awarded the C.B.E. by King George V, and later received the Harmon Trophy and a £10,000 prize from the Daily Mail. Songs were composed about her such as “Amy, Wonderful Amy” and “Johnnie (Our Aeroplane Girl)”. For a short time Amy encouraged the use of her nickname “Johnnie”.

The Mollisons received an enormous amount of media attention and were known as “The Flying Sweethearts”. Amy was seen as an influential women’s role model for her achievements in male dominated arenas as well as for her fashion choices, often sporting the latest designs by Coco Chanel and Elsa Schiaparelli.

1933 saw the Mollisons set out to make a record east-west flight to the USA. Their first attempt from London Croydon Airport failed at take-off when their heavily-laden aircraft’s undercarriage collapsed. Their next attempt saw a successful departure from Pendine Sands in South Wales and a crossing of the Atlantic, westbound for New York. Running out of fuel just short of their destination, they made a forced landing in Bridgeport, Connecticut and were both slightly injured in the crash. The flight was still viewed as a success and the Mollisons were feted by New York society. Amy and Jim met with President Roosevelt and the First Lady, Eleanor Roosevelt and received a tickertape parade down New York’s Wall Street, one of only 17 US ticker tape parades during the decade.

From 1935 to 1937 Amy was the President of the Women’s Engineering Society and was the youngest woman to hold the esteemed position. 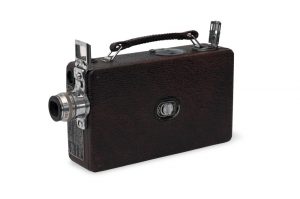 Amy Johnson’s father’s cinecamera, which was bought for him by Amy herself. Donated by Molly Jones.

With the outbreak of the Second World War and the formation in 1940 of the Air Transport Auxiliary, Amy joined up. Often referred to as “The Beauty Chorus” due to the large number of high-profile women pilots, the Air Transport Auxiliary was tasked with delivering aircraft to RAF airbases. Amy quickly rose to the rank of First Officer which was equivalent to the RAF rank of Flight Lieutenant.

Amy Johnson tragically died on 5th January 1941 when the twin-engined Airspeed Oxford aircraft she was delivering on an ATA flight, mysteriously crashed into the Knock John channel in the Thames Estuary. The aircraft was many miles from its intended destination and flying in adverse weather conditions. No official explanation was established as to the cause of the crash and Amy’s body was never recovered. The aircraft itself has never been located or recovered although some small sections of the aircraft wreckage were identified.

The aircraft had departed RAF Squires Gate, Blackpool en-route to the destination aerodrome of RAF Kidlington, Oxford. The weather was poor at the time with heavy drizzle and poor visibility, delaying the departure by an hour. The flight finally left at 11.39 am. The estimated flight time was short at around one hour and fifteen minutes and the aircraft had full tanks of fuel, giving almost five hours of flying time.

The weather at the destination airfield was poor, as it was across the whole south of England at the time, with solid cloud cover at under a thousand feet. As the aircraft was a delivery flight, it was not equipped with radio nor had any electronic radio navigation aids. Amy would have been reliant on visually navigating using a map and looking at ground features to fix her position. Amy is recorded as saying that she intended to fly “over the top” meaning to fly above the cloud tops, with the intent of later descending down through a gap in the clouds, assuming a gap could be found.

At around 3.37pm, the ships of Convoy East 21 spotted an aircraft ditching in the Knock John Channel, approximately 10 miles to the east of Foulness, Essex. HMS Haslemere made a course alteration in an attempt to rescue the unidentified downed pilot. Lieutenant Commander Walter Fletcher, Captain of HMS Haslemere, having seen the aircraft’s pilot in the water, jumped in to try a make the rescue. The water was very cold with a heavy swell and snow and sleet falling. He was unable to rescue the pilot who disappeared out of reach towards the stern of the ship, never to be seen again. Although Fletcher was a strong swimmer he himself got into difficulties, becoming unconscious and having to be rescued. He never regained consciousness and died a few days later.

The eye-witness reports of the time are contradictory in places but the post-accident investigation established that it was Amy Johnson’s aircraft and assumed that she was missing presumed dead. The exact cause of the aircraft accident and Amy’s death was never established but it was an untimely end to one of the world’s great aviators. 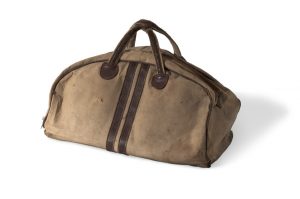 Amy Johnson’s flying bag at the time of her crash, which was recovered from the Thames Estuary. Donated by Molly Jones.

Amy Johnson achieved much, and made a big impact on the world. Achieving success in academic, professional and celebrity spheres, Amy became one of the great female role models of the early 20th Century. With the rise of the narrated newsreel in the 1930’s, Amy became one of the highest profile celebrities in the world, with as much interest in her personal life as in her public achievements.

“I am an ordinary woman who did extraordinary things. The first to qualify as a ground engineer. The first to fly to Australia single-handed. A million people lined the streets of London when I came home. I waved to them from an open-topped car like the queen, the queen of the air.”
Amy Johnson, Queen of the Air