The re-development of the airport between 1926-1928, saw the construction of a special building to incorporate all airport terminal functions together, including the operations of Air Traffic Control and Meteorological Department. Work was completed early in 1928 with the new terminal becoming operational on 30th January. The new terminal was officially opened on Wednesday 2nd May by Lady Maude Hoare, wife of the then Secretary of State for Air, Sir Samuel Hoare. This was the first airport terminal constructed in the UK and the first in the world to incorporate all airport functions and processes, seamlessly, in one integrated structure. The building’s sequentially integrated facilities enabled efficient and expeditious handling of passengers and goods through the airport processes – a key feature in the success of the building’s design.

The new terminal building was part of the redevelopment of the London Croydon Airport as enacted by the Act of Parliament – the Croydon Aerodrome Extension Act 1925. The Act itself was a result of the Public Inquiry into the aircraft accident that occurred shortly after take-off from the airport on Christmas Eve 1924. The Imperial Airways de Havilland DH.34 aircraft, G- EBBX, bound for Paris le Bourget crashed a few minutes after take-off into a garden in South Croydon killing all eight people on board. At the time it was the UK’s worst civil air accident and resulted in the UK’s first Public Inquiry into an air accident, convened at the Royal Courts of Justice, The Strand, London on 23rd January 1925. The Inquiry looked into the shortcomings of the former World War One airfield and suggested safety could be improved by extended the grass runways. To extend the runways the airport itself would need enlargement and improvement requiring an Act of Parliament. The redevelopment and relocation of the terminal saw the site experience a tenfold increase in size to cover 330 acres and the new buildings themselves covered thirty-four acres. When opened in 1928 it was the world’s biggest airport.

The terminal, known as the Administration Building, was re-located to a new site alongside the recently constructed Purley Way (one of the UK’s first road by-passes built in 1925) facilitating rapid distribution of goods and passenger traffic arriving by air. The building was designed by the in-house architects of the Air Ministry- Department of Works and Buildings. The building’s drawings, finalised on 25th March 1926, were titled “Croydon L.T.A” (London Terminal Aerodrome). The project fell under the authority of H.G.Oakley at the Air Ministry with the lead architect being C.H.Andrews. Andrews headed up a team, WB3, of architectural draughstmen to produce the nine drawings required for the building. The 1926 Croydon L.T.A. finalised drawings were themselves a greatly enhanced, enlarged and improved variant of earlier 1924 Air Ministry plans drawn up for London Terminal Aerodrome (Croydon).

Construction of the building was by Wolverhampton-based Wilson Lovatt and Son Ltd. at a cost of £267,000. It was constructed using a steel frame which was a relatively new building technique at the time that was becoming increasingly popular for large buildings. The steel frame added strength and made the building easily extendable in the future, if required. The Air Ministry architects had carefully considered the prospect that the building would need to grow in size as air traffic grew. The architects’ drawings show “stanchions projecting thro’ the roof for future extensions”. Concrete was used extensively throughout the building with pre-cast concrete planks utilised for the floors and roof. Walled with 50,000 pre-cast concrete blocks, the blocks were finished in a special aggregate mix from the China Clay works in Cornwall, giving the appearance of Portland Stone. The windows were steel framed and manufactured by another Wolverhampton-based company, Beacon Windows Limited.

Centre stage in the Administration Building was the check-in area known as the Booking Hall, the central area for administration and passenger processing functions. An innovative design that is now a standard airport design, it featured six check-in desks and administration facilities for the international airlines operating at the airport. The Booking Hall featured a large two-storey atrium surrounded by a first floor balustrade with geometric patterned railings. Atop the atrium sits a magnificent steel framed glass dome, flooding the area with light. The Air Ministry architects were early adopters of “top lighting” principles in the terminal’s design. The Booking Hall was the first passenger check-in area designed and constructed with designated independent check-in facilities for international airlines.

The Booking Hall led through to Immigration and Security checks before exiting through the world’s first designated Departure gate to the south side of the Control Tower. The Arrivals gate was on the north side of the Control Tower. Situated in the middle of the Booking Hall (see photo below) was the octagonally-shaped Departures and Arrivals Indicator- an early version of the electronic Departures and Arrivals information boards now commonplace in airports. Each face of the Indicator would display on a clock face the scheduled time of departure and arrival of each airline’s service. Imperial Airways, as the main operator at the airport, had two faces reserved for its use.

Passenger processing would begin in the Booking Hall with check-in and individual weighing of passengers and baggage. An individual’s weight was need to ensure that the aircraft was loaded correctly and remained in balance. The next step was through the Examination Hall to negotiate the security processes consisting of three independent agencies. Passengers would be checked by the Criminal Investigation Department (C.I.D), Immigration Officer and Medical Officer before emerging through the designated Departure Gate and onto the concrete apron, ready to board the aircraft. On arrival, passengers would enter the terminal building via a the Arrival Gate and be assessed by Customs Officers in the Customs Hall before progressing through to the Examination Hall and further security processes before emerging into the Booking Hall. The separation of the passenger and arrival route was an important step that facilitated an efficient flow of passengers through the airport and provided greater security conformance.

Enveloping the central Booking Hall were two cargo wings- one to each side of the building. The North cargo wing handled “Goods out” of the UK and the South cargo wing handled “Goods in”. Each of the two wings featured bonded Customs stores and four entrance bays featuring double doors that enabled easy vehicular access, facilitating improved loading and unloading of goods, freight, mail and bullion. Bullion was stored in a large strong room, located off the Booking Hall, supplied by John Tann of Newgate Street, London. The heavy steel door and John Tann lock was of the type No.117.

The building featured a high speed pneumatic vacuum tube communication system connecting the Air Traffic Controllers in the top of the Control Tower to the Meteorological Office two floors below. The Control Tower itself was 50ft tall and 30ft square, built over four floors, and was the world’s largest and most advanced. With the radio communication masts situated on the top of the Tower’s roof, the overall height was 80ft. 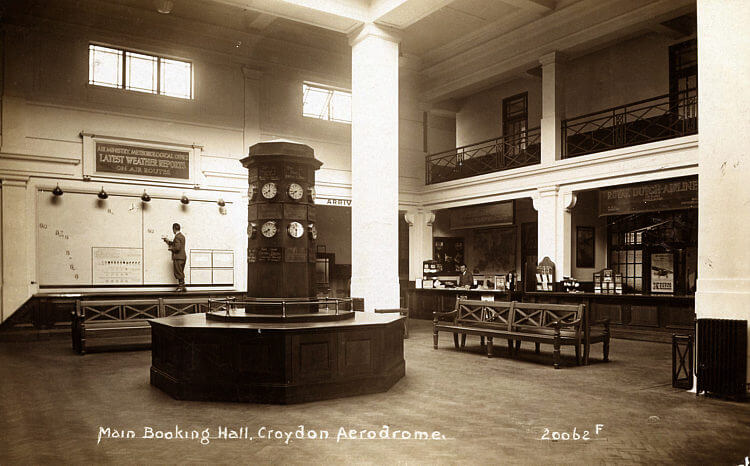