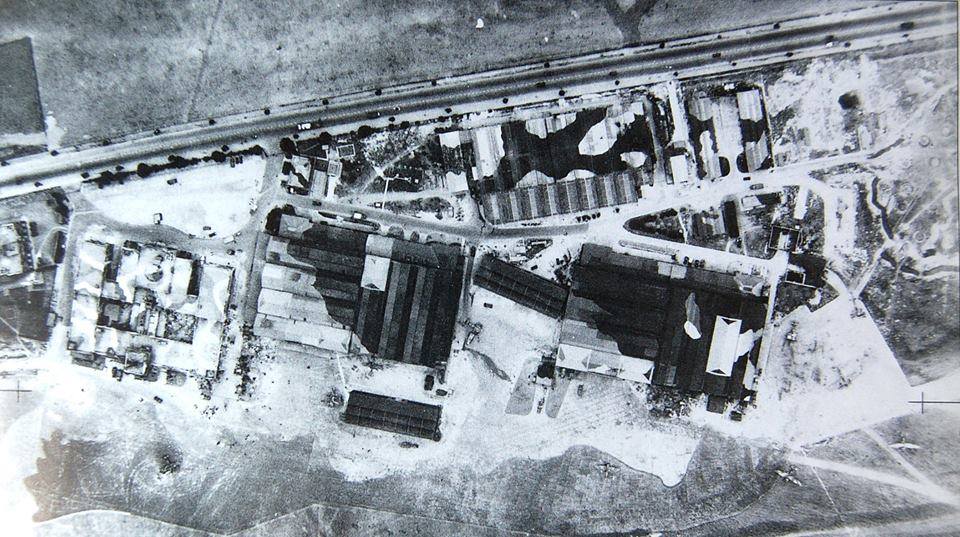 The run up to the Second World War saw a massive increase in passenger numbers as British holidaymakers and refugees rushed to leave mainland Europe. In the final days of August 1939 before the outbreak of war, Croydon saw passenger numbers increase threefold to 1500 passengers a day. On the 30th August 1939, Croydon reverted back to its original role of defending Britain from aerial attack and became Royal Air Force Station Croydon. On 1st September civil airlines moved out, with Imperial Airways re-locating it’s fleet to Whitchurch Airport, Bristol. London Croydon Airport began preparations for the inevitable outbreak of war with Germany. RAF Croydon became a satellite airfield to RAF Kenley and fell under the control of 11 Group, Fighter Command.

No.17 Squadron departed RAF Croydon on 9th September 1939 followed by No.3 Squadron on 12th September and No.615 Squadron on 15th September. No.145 was reformed at Croydon after disbandment in 1919. It arrived on 10th October 1939 in Bristol Blenheims Mk.1F and began conversion onto Hawker Hurricanes on 6th March 1940. Conversion was completed on 30th March 1940.

No.607 squadron returned on 22nd May 1940 and departed two weeks later on 4th June. The same day saw the arrival of No.111 Squadron in Hawker Hurricanes Mk.I commanded by Squadron Leader J.M Thompson, DFC. No.111 departed on 19th August 1940.

Battle of Britain and RAF Croydon

With the swift fall of France to the invading German forces, German attention was turned towards Britain. During July 1940 German forces launched Kanalkampf (Channel Fight) and began attacking British shipping in the English Channel as a precursor to an invasion of Britain.

On the 10th July, the German Luftwaffe escalated the intensity of air raids and this day is oft viewed as the beginning of what would famously be known as the Battle of Britain. The air war over south-east England raged for three months and three weeks eventually subsiding on 31st October.

The First Day of the First Phase- 10th July

Poor weather in the morning with heavy cloud cover and driving rain limited the Luftwaffe mainly to  reconnaissance missions. The improved weather around midday saw German squadrons launch to attack a British shipping convoy, codenamed “Bread”, routing through the English Channel. The Hawker Hurricanes of No.111 Squadron Croydon were scrambled at 13.05 along with Spitfires of No.74 Squadron Hornchurch, Hurricanes of No.56 Squadron North Weald, Hurricanes of No.32 Squadron Biggin Hill and six Spitfires from No. 64 Squadron Kenley. The RAF Fighters engaged with the Luftwaffe off the coast of Folkestone, Kent- this would be the first major engagement of the Battle of Britain.

The German formation consisted of 24 Dornier Do17s, escorted by 30 Messerschmitt Bf110s and more than 20 Messerschmitt Bf109s. No.111 Squadron’s Hurricanes were first to engage, attacking the Dornier Do17s. The Dornier formation started to break up to avoid the more manoeuvrable Hurricanes. Flying Officer Thomas P. K. Higgs of No.111 Squadron flying Hawker Hurricane P3671 attacked a Dornier at high speed and collided with the aircraft. Both aircraft lost a wing and plunged into the Channel. F/O Higgs successfully bailed out but drowned with his body later being washed up on the Dutch coast. F/O Thomas Peter Kingsland Higgs (pictured) would be the first casualty of the Battle of Britain and the first of “The Few” to be “Killed In Action”. 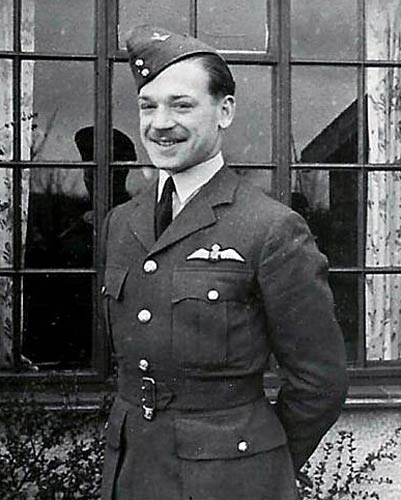 RAF Croydon’s Fighter Squadrons were in the thick of the battle as an integral part of No.11 Group Fighter Command and controlled in Sector B along with RAF Kenley. No.11 Group was split into eight sectors designated from A to G and also Z sector which covered the north-west of London and RAF Northolt. Standard operations for RAF Croydon and Kenley Squadrons for the early part of the Battle of Britain were to position to RAF Hawkinge on operational requirement on the day to bolster air defences against German air attacks from across the English Channel.

The 15th August saw massive Luftwaffe attacks on Britain, codenamed “Eagle Day”. Eagle Day was to be the day that the Luftwaffe planned to finally destroy the RAF and gain air superiority. After numerous raids throughout the day, a squadron of Luftwaffe bombers designated Erprobungsgruppe 210 (Test Group 210) attacked RAF Croydon at just before 1900 hours, their fifth sortie of the day. Erpro 210 were an elite squadron of the Luftwaffe, formed to develop bombing tactics. Due to poor visibility heading westbound into the evening sun, Erprobungsgruppe 210 had missed their primary target of RAF Kenley but found themselves in the vicinity of RAF Croydon. The squadron was commanded by Swiss-born Hauptmann W. Rubensdorffer and consisted of twenty-two twin-engined Messerschmitt Bf110 fighter-bombers, escorted by seven Messerschmitt Bf109 fighters. The attack resulted in multiple substantive hits on the surrounding factories, airfield, airport terminal and a direct hit on the armoury. The airport terminal was hit by armour-piercing and incendiary bombs, with the armoury being completely burnt out.

The factories surrounding the airfield took the brunt of the attack. The Bourjois factory located just north of the airfield on Waddon Way took a direct hit, killing three soap millers and severely damaging the art deco styled building built in 1936. The Redwing Aircraft Factory was damaged along with the British N.S.F Ltd factory, producing electrical components The latter suffered the most severe damage and loss of life, with over thirty-five people killed and the building virtually razed to the ground.

The Waddon housing estate on the east side of the Purley Way also suffered direct hits, with houses hit in Foss Avenue, Coldharbour Way, Waddon Way and Coldharbour Crescent, with much loss of life. The bomb damage due to bomb blasts affected 200  houses and left 180 people homeless. A search for the dead and wounded continued until the evening of 17th August when the search was concluded.

Some 62 civilians lost their lives, as did five airmen of No.111 Squadron at RAF Croydon and one airman from Station Headquarters. 17 of the civilians killed could not be identified and were buried in a mass grave at Croydon Crematorium. On the airfield, two civilian telephone operators were injured, four airmen from No.111 Squadron and one airman from No.1 RCAF Squadron. Over 180 people were injured in the surrounding factories and houses although final numbers were never fully verified. 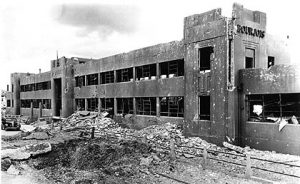 No.111 Squadron had been scrambled at 18.50 and were ready to engage the attacking German Squadron. Led by Squadron Leader Peter Thompson, No.111s Hawker Hurricanes were attacking the German Messerschmitt bombers before they had reached the airfield boundary. This scattered the German attack, with many of the fighter-bombers releasing their bomb loads indiscriminately to escape the British fighters. Reports recorded how one Messerschmitt Bf110 was chased by a Hawker Hurricane south-bound along the Purley Way at virtually zero feet.

Eprobungsgruppe 210 paid a heavy price for the attack, losing six Bf110 aircraft with their two-man crews and one Bf109 as they attempted to return to their base of Calais-Marck in northern France.

16th August saw further Luftwaffe attacks. No.111 Squadron was airborne just before midday en-route to RAF Hawkinge when it was redirected towards Dungeness on the Kent coast. A mass formation of around 200  Dornier Do17s and their Messerschmitt Bf109 fighter escorts were heading towards South-East England across the English Channel. No.111 Squadron engaged and claimed three Dorniers and one Bf109 in the engagement but lost two of their own – Flight Lieutenant Henry M. Ferriss, DFC and Flight Sergeant R. Carnall.

For the Luftwaffe,the day and attacks were a failure. It resulted in their heaviest losses in the campaign with a ratio of loses of over 2.5:1 against the RAF and became known as Schwarzer Donnerstag (Black Thursday).

This day would see the German Luftwaffe make an all-out offensive in an attempt to eradicate RAF Fighter Command and gain air superiority. The Luftwaffe’s key targets were No.11 Group airfields including both RAF Kenley and RAF Biggin Hill which housed the strategically important Sector Operations Rooms.

As the attack began on Kenley and Biggin Hill, all fighter squadrons including Croydon’s No.111 squadron were ordered airborne in defence. No.111’s Hawker Hurricanes engaged the Luftwaffe’s low level Dornier Do17s bombers at 13.05 at 3,000 feet in the area of Biggin Hill. In the ensuing engagement, Flight Lieutenant Stanley Connors was shot down and killed which may have been “friendly fire” from RAF Kenley’s ground defence. Flight Sergeant Harry Newton was brought down by return fire from a Dornier Do 17. His aircraft burst into flames and he was badly burned before successfully bailing out. Flight Sergeant Harry Deacon had shot down a Dornier Do17 and was returning low-level to RAF Croydon when he was accidentally shot down by the ground defences at Kenley but successfully bailed out.

No.32 Squadron from Biggin Hill had broken up the Dornier Do17 formation of Bomber Geschwader 76 as they approached RAF Kenley. Many of the Dorniers broke off their approach to RAF Kenley and instead attacked RAF Croydon. Bomber Geschwader 76 in all dropped one large high explosive bomb, ten medium explosive bombs and eight delayed action bombs. The bombs hit “A” Hangar and the middle of the main building, two bombs on the edge of the airport apron, one bomb on an airfield road way and two on Purley Way Playing Fields. One soldier was killed in the attack with one Hawker Hurricane destroyed and one damaged.

From 1941, significant building works took place to complete the conversion to a fully operational RAF airfield. Concrete runway starter extensions were constructed for the grass runways, a perimeter track and aircraft hardstanding on the western side of the airfield. Additionally, on the western side, air raid sleeping quarters and a Standby Set Building were built. The Standby Set contained two diesel generators to supply emergency electrical power to the airport in case the main electrical supply was knocked out during an aerial bombardment.

On 25th March 1943, RAF Transport Command was formed absorbing RAF Ferry Command. RAF Croydon became a key RAF Transport Command airfield and, over the following years, transported thousands of troops in and out of mainland Europe.  Thousands of personnel from all over Europe, including wounded military personnel,  prisoners of war, and refugees flew into Croydon. Annual users of the airport peaked in 1943 at just over 230,000 people.

In December 1943, 110 Wing RAF was formed with Wing Headquarters at RAF Croydon. The Wing consisted of two Squadrons,147 Squadron based at Croydon operating Douglas Dakotas with its sister 167 Squadron, based at Blackbushe operating Vickers Warwicks. The Squadron grew, and eventually reached a strength of 98 aircraft. 147 Squadron needed over 700  personnel based on the airfield to service the operation.

As the threat of the Luftwaffe had diminished over Britain and northern France by mid-1944, 110 Wing began establishing scheduled services with a recommencement of the Paris route.