World War I – The Beginning

The airport traces its history back to World War I. In response to Zeppelin bombing raids on London and Croydon, the site was selected as part of the Royal Flying Corps Home Defence in December 1915. A parcel of land to the West of Plough Lane, Wallington, belonging to Manor Farm was requisitioned under the Defence of the Realm Act. The site was on the boundary with Croydon and Sutton and was referred to as Beddington, Croydon and occasionally Wallington aerodrome. Timber and canvas Bessoneaux hangars were rapidly constructed ready to accept the first detachment of aircraft designated for the airfield. The first aircraft, two B.E. 2C’s, arrived at Royal Flying Corps Station Beddington in January 1916.  Stationed with the aircraft were two pilots, six aircraft engineers and a group of Royal Engineers equipped with a search light. The pilots were expected to take shifts in sleeping alongside the aircraft in hearing distance of a telephone that had a direct landline connection to the War Office. The War Office would issue warnings of impending airship air raids.

On the night of 31st January 1916, the Croydon based aircraft were called on their first defensive sortie against the German Zeppelin airships. Intelligence and aircraft co-ordination was difficult. The aircraft were not fitted with radio and were given the vaguest of information on where the German airships were sighted. On the night of this raid the Zeppelin airships crossed the UK coast in Norfolk, with their target being the North of England- a long stretch for the range of a B.E.2c based south of London.

Initially, the Royal Flying Corps found it very difficult to successfully defend or bring down a Zeppelin. The aircraft of the time had limited capabilities and limited armaments. The B.E. 2c could reach a maximum altitude of 10,000 feet and it would take over 45 minutes to do so. Zeppelins would generally cruise at a higher altitude of 12,000 feet making it virtually impossible for the RFC aircraft to engage the German airships. The weaponry in early 1916 was also not up to the job of disabling or bringing down an airship. It was not until 3rd September 1916, when new weaponry was available to the RFC, that a Zeppelin airship was finally shot down.

As the war continued, additional aircraft were stationed at Croydon including Sopwith Camels, Sopwith Pups, Avro 504’s and Bristol Fighters. Aircraft from Croydon were launched against the marauding German Zeppelins on the 31st March and 2nd April but again the missions proved to be unsuccessful in engaging with the airships. The airfield moved primarily to a training role with No.17 Reserve (Training) Squadron based at the airfield until 1917. The Training role was handed over to No.40 Training Squadron in 1917 followed by No.29 Training Squadron in 1918.

Through 1916 and 1917 further facilities, equipment and personnel were poured into the new aerodrome. New buildings were constructed to support airfield operations; hangars, offices, storerooms, billets and more were added as operations continued to grow alongside the expanding military personnel and support functions.

On the 1st April 1918, the Royal Flying Corps and Royal Naval Air Service were merged to form the Royal Air Force. In 1919, HRH Prince Albert, later King George VI, and HRH Prince of Wales, later King Edward VIII, received flying training at Croydon with No.29 Training Squadron. Prince Albert’s Flying Instructor was Captain Alec Coryton (later Air Chief Marshal). The Prince achieved his wings at the airfield and became the first member of the Royal Family to learn to fly.

Early military aviation was hazardous even when not under combat conditions. Nine flying accidents were reported in the first few months of the airfields’ existence. Flying training itself was quite dangerous, with many fledgling pilots suffering accidents or worse, being tragically killed. The RFC station at Croydon was no exception. On October 1917, a trainee pilot was killed when he crashed in the grounds of Queen Mary’s Childrens Hospital, Carshalton, and another two airmen lost their lives in November in a mid-air collision over Woodcote Road, Wallington.

Winston Churchill often visited the aerodrome. In his book “Thoughts and Adventures”, he gives an account of his flying lessons at Croydon Aerodrome during 1919. Churchill gives a vivid recollection of one of his final flying lessons that resulted in a brutal crash. Fortunately for Britain, and due to the skills of his very capable Flying Instructor, Colonel Scott, it was a crash he survived.

Squadrons returning from the frontline in France would be stationed at Croydon on their return to re-accustom themselves to a non-combat environment and further flying training, overseen by Air Vice-Marshall Vincent.

In July 1919, the fledgling RAF service established No.1 Group Headquarters at the aerodrome along with the Air Council Inspection Squadron. With the post- war review of all the RAF’s airfields and operations, the RAF Station at Croydon was deemed to be surplus to requirements and the site was vacated in February 1920. The aerodrome was handed over to civilian commercial operations and became Britain’s primary airport on 29th March 1920. 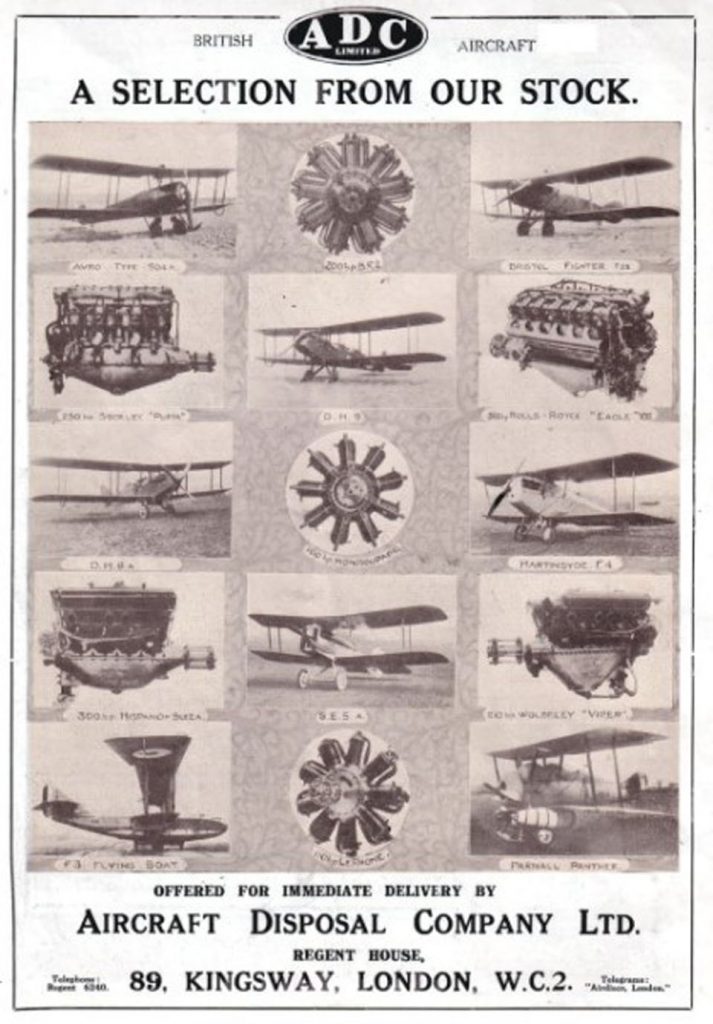