Jean Batten – The Garbo of the Skies. A young Croydon boy’s recollection. 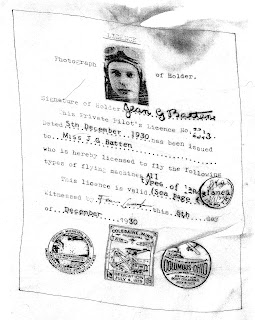 This week we have a post from a member of our University of the Third Age Shared Learning Team – Mike Homewood.

Within the books and papers of the Croydon Airport Society is this copy of the recently discovered Flying Licence of New Zealand aviatrix Jean Batten. Also the film star like pose, which added an extra glamour to the early female flyers. No wonder a small boy and his father were eager to get a glimpse of this flying icon of the age.
Image: Flying Licence Croydon Airport Society (Donated by Mrs Dunn)
Peter Sherman’s Recollection (29 June 2015)
October of 1937, I was a lad of 7 years, living at 53 Miller Road West Croydon. A regular treat in those days was to walk with dad to Croydon Airport on a Sunday morning, to watch the rich and famous people coming and going. On this particular day we were expecting the arrival of Jean Batten from Paris after another record breaking flight (Australia to Croydon in 5 Days 18 Hours).
This was an important event so dad paid up for the two of us to go onto the roof of the Aerodrome Hotel (three pence for him and one penny for me ). Dad got me to go in front with him behind, the Tannoy then told us that the flight was delayed in Paris due to fog. Half an hour went by, another Tannoy announcement (still delayed but fog might clear soon). Dad started to worry that we may be late for Sunday lunch, in our house it was the most important event of the week, The only time we all sat down together, Mum, Dad, two older sisters and me, and NOT TO BE MISSED FOR ANY REASON!
Another Tannoy Message: Miss Batten had just left Paris (loud cheering from the crowd), she should arrive in about 50 minutes. ‘OK’, says my Dad, ‘We will wait’. 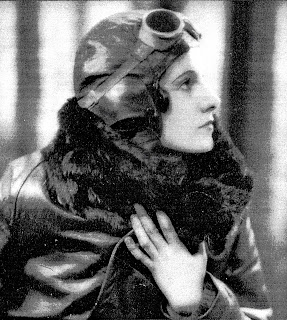 At long last the sound of a light aircraft. The little plane landed without a hitch and taxied on to the apron just below us. A little lady in a big leather coat and white helmet started to get out. A huge crowd began to gather around the plane (it was estimated there were over 10,000 people there that day). A Band started to play (I think it was Rule Britannia).
There seemed to be lots of hugs and kisses! All a bit much for a 7 year old. Suddenly it was all over, Dad looked at his watch, Oh Lord it’s nearly 3 o’clock, now we will be for it. We hurried down the stone steps of the Aerodrome Hotel and along to the bus stop, WOW, we are going home by bus another treat.
I had never really seen mum really cross. She let dad know how she felt! But I can still remember his smart reply: ‘We have seen History made today! A proud day for Britain and, any way, it’s all part of the lad’s education’.
Post by Mike Homewood from a recollection by Peter Sherman, Barton on Sea Hampshire.