Share on facebook
Facebook
Share on twitter
Twitter
Share on linkedin
LinkedIn
U3A member Peter Day examines the safety of flight in the 1930s:
In the 1930s flight in heavier-than-air aeroplanes was still in its infancy. The Wright brothers had made the first such flight only in 1903. Aeroplanes were flimsy with some parts of the fuselage still covered with cloth, to save weight. Engines were underpowered and unreliable. Planes flew slowly and could not climb to a great height because of lack of oxygen, they weren’t pressurised like modern planes, so flights were subject to turbulence. So were those early passengers risking their lives? Read more…..

PART ONE 1903-1929: The Early Days of Aviation.
For a long time man’s efforts to copy the birds and ascend into the heavens had depended on lighter-than-air craft such as hot air or hydrogen balloons. These were entirely subject to the direction of the wind. The development of the dirigible; large cigar-shaped craft such as the Zeppelin, carried into the sky by hydrogen and with sufficient lift to carry the heavy engines, only heavy engines being available; did enable the introduction of passenger travel but hydrogen is highly explosive and the huge size of the craft meant it could only proceed in relatively benign weather conditions.
It is generally accepted, though sometimes disputed, that the first powered heavier-than-air flight was made by the Wright brothers on December 17th 1903 at Kitty Hawk, North Carolina. The first flight, with Orville Wright at the controls, lasted 12 seconds and the aircraft flew about 40 metres – less than half of a 100 metre running track. In fact four flights were made that morning, the last covering over 200 metres. But then the machine was blown over by a strong gust of wind and badly damaged.
The Press were suspicious of claims to be the first to fly so the Wright Brothers achievement

was not widely recognised, in fact in 1906 when Frenchman Alberto Santos-Dumont struggled into the air standing upright in a clumsy biplane he was convinced he was the first man to fly! The French did, however, take to flying with huge enthusiasm. In July 1909 Bleriot was the first man to fly across the English Channel and in August of the same year the first great “air meet” was held at Reims – records were broken for speed, for height and for endurance, the Anglo-French pilot Henri Farman flying for more than three hours. The same pilot also thrilled the crowd by taking off carrying two passengers.

Within 18 months France would have 350 certified pilots, in Great Britain there were about 60, then came Germany, Italy & Belgium and the USA, where such flying had been pioneered, came a lowly sixth. These young pioneers were certainly risking their lives. Shortly after the “air meet” in Reims, Eugene Lefebvre, who had been fined $4 by the judges for “excessive recklessness and daring”, became the first person to die while piloting a powered aeroplane. 1910 saw the deaths of a further 31 of these daredevils.
The First World War was a huge stimulus to the development of aeroplanes and to the training of more pilots. The Wright brothers thought that aeroplanes would have the potential to abolish war because the enemy’s intentions would be visible from the air, but others saw the potential for warplanes. By the end of the War the Allies had the use of thousands of airplanes, including bombers.
After the First World War
After the war passenger carrying operations sprang up in Europe very quickly making use of surplus military planes that could be converted. Surprisingly the Germans were the first, operating internal flights within three months of the Armistice. By the end of 1919 the French and the British were operating London to Paris services and the Dutch airline KLM was started the same year.
The first member of the British Royal Family to become involved with flying was the then Prince of Wales, later to become King Edward VIII, who gained his wings while serving in the First World War. Reports suggest that Edward VIII was taught by Martin Val Baker, the same man who taught Amy Johnson to fly.
The passenger carrying capacity of these early planes was limited and the airlines were dependent on Government subsidy – as some airlines still are!
Accidents certainly happened. The Croydon Airport Society has constructed a database listing 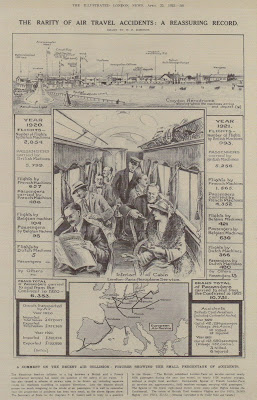 all accidents which had some connection with Croydon Airport. It lists 273 accidents between the 1st of January 1919 and the end of December 1929. But in all those accidents there were only 84 fatalities, and 478 survivors. Certainly the small carrying capacity mitigated the loss of life, and possibly the fact that the planes flew slow and low made accidents more survivable. Often a substantial loss of life occurred when the plane was forced to ditch in the English Channel, or when there was a fire.

In April 1922 there was a mid-air collision over Grandvilliers in France, between two aircraft, one headed to Croydon from Paris, the other to Paris from Croydon. 5 people on one aircraft were killed, and two on the other – with no survivors. Later that month the Illustrated London Times (to the right) carried a feature comparing the number of flights with the number of accidents. “The Rarity of Air Travel Accidents: A Reassuring Record”.