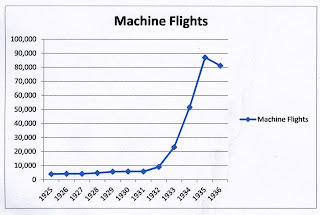 Rapid Development in the 1930s.
The graphs showing the number of flights (Machine Flights, left), the number of Passengers and the amount of Cargo and Mail carried show a huge increase starting in 1931/32. We also know that Croydon was handling about half of all UK passengers, 62% of the mail and 84% of the cargo – so this increase inevitably made for a much busier Croydon. So did this increase bring with it an increase in accidents and fatalities? 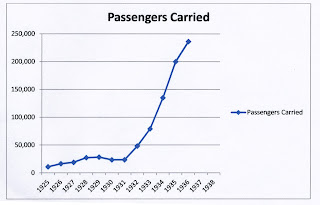 That same database shows 278 accidents between 1 January 1930 and 31 December 1938. That represents a small increase per annum over the previous decade, but in that time the number of flights increased sixteen fold. The number of fatalities was twice as high, at 162 – but the number of passengers carried had increased 25 fold. So this evidence would suggest that flying became much safer in the 1930s. 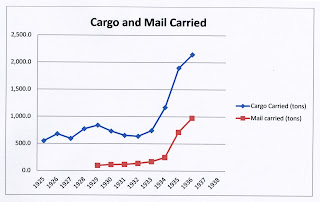 The increased capacity of the planes gave greater potential to turn accident into disaster, as the examples given below show, but overall it does seem flying was becoming less perilous and it is notable that during this period members of the Royal Family and other ‘notables’ took to the sky more frequently. So one can assume they and their advisers considered flying to be safe enough.
Significant accidents in the 1930s.
1933
March. Imperial Airways Argosy from Brussels to Croydon crashed following an in-flight fire, 15 people were killed.
December. Imperial Airways Avro from Brussels to Croydon crashed into a radio mast in foggy conditions, 10 people were killed.
1935
December, SABENA Savoia from Brussels to Croydon crashed on approach in poor weather, 11 people killed. The coroner’s jury blamed it on an error of judgement by the pilot owing to abnormal weather conditions but that “they attached no blame whatever to the pilot” The investigation was hampered by souvenir hunters carrying off parts of the wreckage.
1936
December. KLM DC2 from Croydon to Amsterdam crashed on take-off, in fog, 15 people killed. Worst accident in British aviation history at the time.
1938
October, SABENA Savoia Croydon service to Berlin, structural failure in flight, 20 people killed.
Imperial Airways 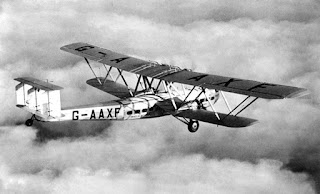 The workhorse of Imperial Airways European Service was the Handley Page HP45. For the long range routes to India and other parts of the Empire they used the HP42. Confusingly Imperial Airways called them both the HP42 – HP42 E for the Eastern routes (India & South Africa) and HP42W for the Western (European) routes.
Only 8 were built, four of each type. They were 4-engined biplanes, each engine producing 490 or 555 Horse Power (depending on whether or not they were supercharged). The maximum number of passengers carried was 38 – with reduced luggage/cargo capacity.
They were one of the first aeroplanes in which the flying crew (pilot and assistant) were in an enclosed cabin. They were also unpressurised meaning they could not fly at more than a few thousand feet as the passengers would feel the absence of oxygen, but flying low means increased turbulence so they could be bouncy flights.
Their operation was not accident free, the Airport Society database shows 34 incidents involving the Imperial Airways aircraft all over the world – from Croydon to Cairo, Kampala to Karachi. These incidents were of varying levels of seriousness, from a wing-tip collision between two HP 42E while taxying in Khartoum, to a forced landing in the desert near Qatar leading to the complete loss of the aircraft and another that was burnt out in a fire in a hangar in Karachi.
But one thing is significant – in all the years of operation and the millions of miles these aircraft flew not a single passenger died. There was a death in the fire in Karachi – but not a passenger.
The 1930s might seem to be a potentially dangerous time to have been an air passenger. Certainly there were more accidents for every 1,000 passengers than there are today. But a single Boeing 747 accident can kill 3 times as many people as the total of fatalities in the 1930s. The 200,000 people who flew on commercial services in 1936 evidently didn’t believe they were putting themselves in mortal danger.
Peter Day