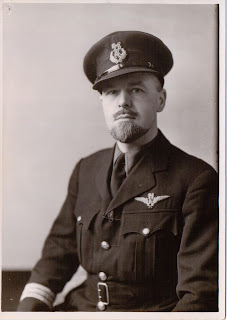 Cheryl Bailey finishes her pieces on the Silver Wing Service with a maverick celebrity pilot:
The Silver Wing flights from Croydon to Le Bourget, Paris in the 1930s were a feature of the celebrity lifestyle of the time and the pilots involved became celebrities too. Foremost among them was Capt. Oscar Philip Jones, known simply as ‘O.P.’ to his friends and colleagues but certainly not to the other staff of Croydon Airport and Imperial Airways where he was viewed with awed respect and a tinge of fear.
His flying career had begun at the age of 18 towards the end of WW1. At the end of the war, he became a pilot in a firm offering ‘joy rides’ to passengers and then progressed to acting as a pilot for Instone Airlines which was one of several which joined forces in 1924 to form Imperial Airways. He flew many routes and, indeed, in 1926 was the first pilot to transport a member of the royal family when the Prince of Wales (later Edward VIII) flew from Paris to London.
When Imperial Airways launched their new, glamorous cross-channel Silver Wing service at the beginning of the 1930s, OP was among the first bunch of pilots who had to put away their old, stained leather flying suits and adopt the new image of a pilot captain resplendent in a dark blue uniform and peaked cap reminiscent of a Navy captain.
OP appeared to relish his celebrity status. By this time he had adopted a ‘piratical’ beard (which he kept for the rest of his life) and enjoyed the frisson of recognition which greeted his appearance at the airport just fifteen minutes before take-off was due. He would give a cursory glance to the weather charts and then stroll onto the tarmac, often pausing at the top of his entry ladder for a photo opportunity.
At that time, he lived in Purley and would drive to Croydon for this last-minute entrance in his Daimler. On one occasion when a road accident had blocked the road, he hailed down a milk-float to complete his journey on time. Though famed for his skill and expertise in the air, Jones always insisted that his main interest in life was breeding bulldogs of which he owned many. He loved dogs and was known to ‘rescue’ them from freight passage and sit them beside him during a flight to give them some company in the air. I don’t think that would be allowed these days!
The flying public adored his charisma and often asked for him by name when booking flights. He was also well-known for his skill and calm in tricky situations and this probably was another reason that he was so popular with his passengers.

In 1932, when flying almost blind in atrocious weather conditions, his HP42 was struck by lightning somewhere over Tunbridge Wells at 2,000 feet. There was a deafening crash and a blinding light. The cockpit window tore away damaging two of his four propellers badly and allowing torrential rain to pour in flooding the floor within minutes. Both he and his co-pilot , A.E. Wright, were thrown forward and the plane went into a steep dive. Jones and his co-pilots truggled to regain control by pulling back on the throttles and slowly the plane began to climb again. They turned back to attempt an emergency landing in a field but visibility was still terrible and all the radio and navigation equipment had blown. The communicating door between the cockpit and the main cabin had jammed so a note was written to reassure the passengers and slipped through a crack.
At that time, neither of the pilots knew whether the passengers were alive or dead and what the state of the rear of the plane was. (In fact, the tail fin was damaged and the fuselage was torn.) Finally, through a break in the cloud, they realised they were over Redhill and managed to follow the railway track back to the beacon signalling Croydon Airport itself where OP brought the plane down safely. After a short while, crew and passengers set off for Paris again in another plane. Only five passengers of the original thirteen demurred – how’s that for pluck!
Cheryl Bailey