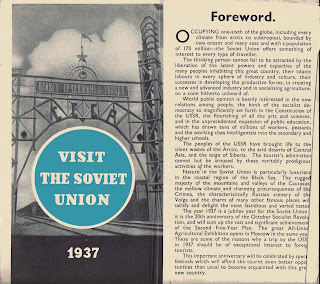 with Croydon Airport itself. I certainly was not expecting to find a tourist brochure to the Soviet Union, let alone one dating to 1937. 1937 was the start of one of Stalin’s most terrible political purges, known as the Great Purge or Grea Terror, in which it is estimated (depending which historian you read) that 690,000 to almost 2 million people were executed.

Pictured to the left is a travel brochure in the Monk Collection at Croydon Airport. Produced to commemorate the 20th anniversary of the October Socialist Revolution, the brochure gives a guide to improvements achieved in factories, leisure, education, agriculture and more across the Soviet Union. Unsurprisingly this brochure makes no mention of the mass arrests, internments and shootings but promises that ‘the Soviet Union offers something of interest to every type of traveller’. 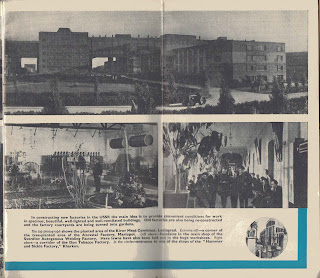 Union to eliminate different cultural customs and languages, the brochure celebrates the ‘many peoples living in the Soviet Union or USSR and claims that ‘they all enjoy equal rights’. The brochure extols the vast country of the USSR and its different landscapes as well as the technical achievements made under the Socialist goverment, such as dams and factories. The page on the left stresses the better conditions for the workers as well as the huge advances in production made over the last 20 years – see the image to the left. Leisure is featured with a section on how the ‘masses’ can now enjoy art, music and  theatre, particularly in Moscow and Leningrad. The image below shows resorts in the Black Sea and workers taking advantage of their ‘right to annual rest on full pay’. 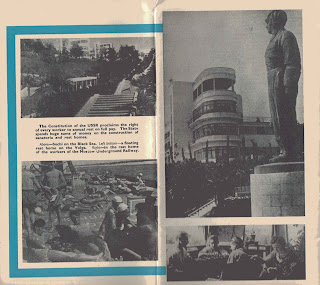 So why was this brochure produced? It was clearly aimed at travellers and tourists wanting to not just see the natural and historic sights of Russia and the Soviet Republics that made up the Soviet Union, but to see the achievements made under Communism. The pamphlet was printed in London and possibly commissioned by the Soviet Union’s own travel agency that was trying to promote the USSR as a place to visit for leisure and political stimulus. British writers and intellectuals, particularly those who were socialist, did visit the Soviet Union throughout the 1930s. Some like H. G. Wells recognised the political terror going on behind the scenes they were allowed to see, but most did not and celebrated the socialist utopia they were shown or wanted to believe in. It is, as ever, easy to look back with hindsight and the knowledge of the purges, famines and other ‘terrors’ taking place then and wryly grimace at the utopian vision of the Soviet Union as portrayed in these pages. However, historical context is all important and what can seem treatening now (a fascist salute, for example) was not necessarily considered so at the time.

In 1937 a two day Congress promoting friendly relations with the USSR was held in London and was organised by the Committee of Peace and Friendship with the USSR, which included members such as the composer Ralph Vaughan Williams, writer Vera Britain and playwright Georg Bernard Shaw. This brochure is designed to appeal to exactly the audience wanting to know more about the ‘great plans’ and industrial rennovations taking place that was discussed 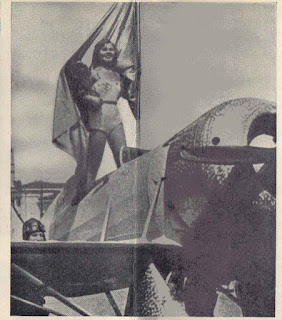 at this Congress. I am only guessing that this pamphlet may have been produced for that purpose and the audience attending that Congress.

There is one plane in the pamphlet and it features as part of a ‘physical and military culture parade’ in a revolutionary festival in the Red Square in Moscow – see right. I dimly remember as a child watching these parades taking place on TV in the 1980s, not realising then that the Soviet Union was in its dying days. And so, it is fascinating to have a glimpse of the propaganda aimed at British intellectuals by Stalin’s regime.