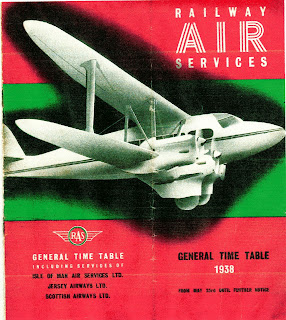 A post from Mike Homewood from our U3A group about some surprising reminiscences from a friend:
A chance remark to an old friend about Croydon Airport, revealed he had worked for Railway Air Services Ltd at Croydon Airport, in 1946. I had no idea that the Railways had run an airline, so a look through the archive at the Croydon Airport Society and all was revealed.
In about 1928 the Railways had begun to notice that they were losing their first class passengers and mail to Imperial Airways. Their fear was that over the coming years air transport would take more and more of their business. The Railways had seen a significant reduction of freight to road transport after World War One and were not prepared to stand by and lose more trade. The prime movers to establish an airline came from Great Western Railway and London, Midland & Scottish Railways.
In 1928, The London Midland and Scottish Railway (Air Transport) Bill was presented to parliament. This encompassed all of the air industries needs, the powers to provide world-wide air services, the provision of aerodromes, and the manufacture of aircraft and engines. Maybe they wanted it to be just like their rail service, providing stations/aerodrome’s and producing it’s own rolling stock/aircraft. This bill meet with many objections not least from the Society of British Aircraft, to the manufacturing cause, to Municipal authorities objecting to the Aerodrome clause, and the worldwide service clause, from existing providers.
After the many objections to the bill it was amended, the Railways dropping the Aerodrome and manufacturing clauses. To which they admitted not to have had any intention of exerting even if such power had been granted. But had only put them in to meet future development within the industry. The World–Wide clause was also amended to Europe, after a joint committee of both Houses of Parliament had examined the bill. The bill was enacted in May 1929. On the bills passing, Southern railways immediately purchased a large block of Imperial Airways shares. 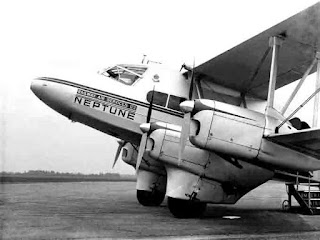 The Great Western Railway initiated the first the Railway Air Service in 1933 chartering Imperial Airway aircraft and crews, then in 1934 the four main railway companies acted together with Imperial Airways to form Railway Air Services. It would appear the Rail companies ran the airline very much as you would run a railway flying routes where there were mainline stations, with airports within the vicinity. The first Air terminal for all RSA tickets was at Victoria station, London, but very soon Air tickets were available at any rail station.
Tickets were fully interchangeable for all or part of both outbound and return journeys. Outbound and inbound could be by air, sea or rail, all these options were open to the traveller. Advance luggage arrangements were also extended to air service passengers. Holders of railway season tickets or bulk travel vouchers were able to obtain discounts on air fares. (What a way to travel one ticket does it all).
The RAS went from strength to strength until World War Two intervened, it was then placed under government control for the duration doing flying routes of national importance. It resumed peacetime flights in early 1946 and by August 1946 the UK government had formed the British European Airways Corporation. This airline was given a monopoly of scheduled air services within the U.K. and Continent. RSA continued to operate its services on the behalf of BEA until 1947 when it planes and staff was absorbed fully into BEA. 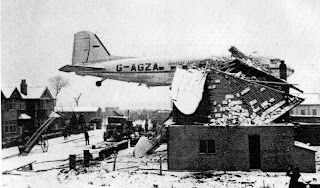 In the RAS archive at Croydon, there is a report of one of its Dakota’s coming to rest after taking off from Northholt on the roof of No 46 Angus Drive Ruislip. There is no mention of the word crash, its almost as if this is a just an unfortunate incident. Even more unbelievable is that the crew of four and one passenger then climbed into the loft of the house walked across the landing, down the stairs and out of the front door. 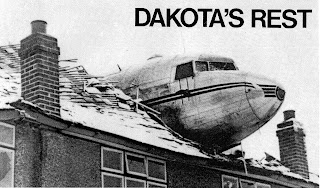 This tempted a look at the fine print of the RAS rules and regulation should an emergency landing be made which it is hoped will be found amusing in the light of today’s regulated world – Article 10 from the RSA Rules and Regulations:

Should an emergency landing be made at any point the pilot will telephone on landing to the nearest railway station, irrespective of the railway company. On receipt of a pilots message the station Master is immediately to arrange for one or more cars, as required, to proceed to the where the machine has landed and take the passengers and cargo to the nearest railway station giving the best connecting service to there air destination. Afterwards notifying the Chief Commercial Manager, District Passenger Manager and Superintendent of RSA Ltd., by wire. First class single rail and /or steamer tickets should be issued in exchange for the passenger’s air tickets the destination shown upon the air ticket or such other point as is specified by the pilot. The rail and/or steamer tickets must be accounted for in the usual way, and the air ticket surrendered should be dealt with as warrants and sent to the Chief Accountant’s Department. No Charge should be collected from the passenger in such either for the tickets or the use of cares, but a certified account in respect or conveyance accompanied by a full report of the circumstances is to be forwarded by the Stationmaster immediately to his District Officer.

If the pilot adhered to these regulations one can just imagine the scenario. The pilot finds the nearest Phone Box, rings the station master at Ruislip station, and calmly asks for a car to be sent for his passengers and the transfer of tickets as his Dakota has come to rest at No 46 Angus Drive (It makes the mind boggle). Apparently the house still survives today and is called Dakota’s Rest.
A few word about the Gentleman who set me off on this quest to find out about the RAS (Derrick Schofield). Derrick had a great interest in aeroplanes as a young man photographing them at every opportunity, he saw an advertisement in the Evening Standard by the RAS for a Junior Traffic Officer at Croydon Airport. This was in 1946 he was 16.1/2 years old, and RAS was working under the banner of BEA, it was his dream job smart uniform with a chevron on the cuff peaked cap and a small office in the corner of the booking hall. From where one could see all the hustle and bustle and some times the famous. He remembers there were only three of them, himself one other who was probably the Senior Traffic Officer and a young lady clerk. His job was to see people arriving off the coach from Victoria check their tickets weight them and their luggage. When weighing the Ladies he had to be most careful so as not to place the scale were all and sundry could see them. He would then usher the passengers though customs and see then seated in the correct seat, then wave the plane of when it had approval for take of from the control tower.
Derrick said the worst part of the job was getting passengers out of the Buffet/Bar when a plane had been delayed. (Some things never change). The highlight of working there was if an aircraft needed go to the hanger for service or repair he was allowed to sit in the cockpit with the pilot while the aircraft taxied to the hanger. Derrick took many photos whilst working there most of which are in Croydon Airport Society Archive, and can often be seen in there publications. In 1949 Derrick was called up for national service. After his service he returned to work for BEA in Manchester and later BOAC London and eventually BA for the next 44 years.
Mike Homewood