Share on facebook
Facebook
Share on twitter
Twitter
Share on linkedin
LinkedIn
A post from U3A member Mike Holmewood on an unusual visit to Croydon:
The building of the new Air terminal at Croydon in the late 1920s may well have seemed like the space race of the 60s to the then general public. This building of modern design, covered with white china clay, was visible for 10 miles from the air. It’s no wonder it attracted the air adventurers / entrepreneurs and people looking for the thrill of flying.

The public was also greatly engaged with this new invention of the age, thronging to see famous fliers and celebrities in their thousands, as can be seen from the many photographs of the time.
The government was not slow in recognising the potential of showing off this New London Terminal to visiting dignitaries, and statesmen from around the world. Whilst looking through archive material at the airport society, and old newspaper articles in Sutton library. It became apparent that some unusual world leaders who were on official visits to Great Britain visited Croydon.
King Amanuallah of Afganisan
King Amanuallah was the first sovereign to fly over London (although The Times suggests that this was the first flight of a King over London there is a possibility that the King and Queen of the Belgians may in fact have been the first).
Wednesday 21st March 1928 was a wet and chilly day, but the local newspapers of Beddington, Carshalton and Wallington, reported that there were big crowds from Croydon and other places in the public enclosures to see His Majesty.
King Amaunallah was visiting Croydon Airport as part of his European tour; he had already been to Hendon and seen an air display. The Kings visit was to inspect the new Terminal building. On arriving with his entourage in 6 cars he was met by Sir Samuel Hoare (the Air Minister), the Mayor of Croydon and Chairman of Beddington & Wallington U.D.C. plus the airport dignitaries.
The King spent a busy morning inspecting the main hall of the terminal. Noticing that the times of departure of aeroplanes on “clocks” in the aerodrome hall did not agree with his watch, the King began to alter his watch, but laughingly discovered that the “Clocks” were not working. Climbing to the control tower he listened to wireless messages relayed from an aeroplane. Also from here he watched Captain Neville Stack as he flew over in a Nimbus 9 aircraft, and demonstrated the dropping of a parcel of mail on a Potter-McKenna parachute. This mail included a message of greeting from the air council in his language and postcards of the airport for all members of the royal party. He was obviously delighted at the compliment.

The highlight of the visit was a flight over London in one of Imperial Airways aircraft the “City of Wellington” one of the biggest airliners in the world at the time with 18 seats. The King would later describe this as the greatest adventure of his life. There were 17 passenger aboard mostly the Kings entourage and a crew of three. Although the weather was somewhat turbulent the machine flew very steady under the skilled pilotage of Captain Roberts Imperial Airways senior pilot.
On taking off the machine headed north and the pilot picked up the Thames and followed it to the Tower of London. Then west at a height of 2500 feet as it flew over St Paul’s / Buckingham Palace / Hyde Park / Westminster Abbey, and the Houses of Parliament, crossing the river at Vauxhall and returning to Croydon.
The King showed great interest in the Panorama stretched beneath him, spending minutes peering through binoculars and getting quite excited when he recognised landmarks. He was also interested in listening through a pair of earphones, to the pilot’s conversation with the control tower at Croydon. 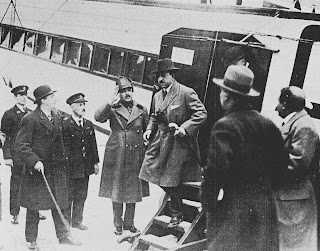 While the King was flying over London the crowd at the airport were treated to a message relayed to the crowd through “powerful Marconi speakers” by the pilot Captain Roberts, and also music broadcast by the BBC. It is said this could be heard “distinctly a quarter of a mile away”.
The King commented on landing “The experience has delighted me. I think it is the greatest thrill which the west has given me yet”, and requested a map of the route flown. This was later produced for him as a memento of the flight.
The flight had lasted approximately 30 minutes with speeds of up to 100 mph although Captain Roberts said it was probably only 85 mph with the occasional burst of higher speed.
The King then went on to inspect a number of light aircraft which had been lined up. The King appeared to be especially interested in the presence of two lady pilots (the King was known to be in favour of the emancipation of woman in his country).
Captain Neville Stack then showed how an Avro Avian aircraft could be brought out of a hanger, and gave the King a demonstration; of how it’s wings could be unfolded. Then be airborne within a few minutes. The visit concluded with an inspection of the powerful revolving Searchlight.
The King was then given lunch in the newly built adjacent hotel, before he drove off to cheering crowds along the Purley Way.
The foreign office also arranged for the king’s trip to be filmed, and a version subtitled in Persian was due to be shown at Kabul’s only cinema on his return.
With the great success of this visit, the Government invited other visiting foreign dignitaries touring Europe to have almost the same experience:
20 September 1928 the Sultan of Muscat.
10 June 1929 The Sultan of Zanzibar.
15 January 1932 the Crown Prince of Ethiopia.
All were treated to Caption Neville Stack dropping a mail parcel with mail and post cards for the royal party. A flight in an Imperial Airways Liner over London, and the demonstration of the folding wing Avro Avian aircraft.
Croydon Airport was proving to be a very useful tool, for the air ministry, and government in foreign diplomatic relations.