Amid the books and papers in the archives of the Croydon Airport Society is “Soviet Man in Space”, published in May 1961. The cover boasts a simple illustration of a man in a spacesuit gazing through a porthole at the pale blue Earth. Except someone has defaced the cover – there’s something written in black ink over Europe and north Africa. It’s the autograph of Yuri Gagarin, the first man in space.

We don’t know how this prized autograph was obtained. Gagarin visited the UK in July 1961 but he flew in to and out from Heathrow. The handwritten archive number CAS 521/99/003, written inside the booklet, tells us that
it was bought in 1991 from the estate of Group Captain Patrick Tweedie (1902-90). Tweedie was vice-president of the Croydon Airport Society when it was formed in 1978 and had a long career in aviation in the RAF, Imperial Airways and as an Inspector of Air Accidents. He was Chief Inspector of Civil Aviation 1953 – 1962, so perhaps he met Gagarin on his UK visit. There will be more about the fascinating life of Captain Tweedie in a forthcoming post, but we don’t know how he acquired this signed copy of “Soviet Man in Space”. (If you can tell us, please get in touch.)
The booklet itself is fascinating, a collection of press releases, statements, interviews, speeches and decrees to celebrate Gagarin’s voyage into space on 12 April 1961. It’s number 78 in a series published by Soviet Booklets, based at the time in Rosary Gardens in South Kensington (where today a two-bedroom flat sells for about £1 million).
There is plenty made of the symbolic victory for the USSR and the Communist regime – “the genius of the Soviet people and the vast power of socialism are embodied in this exploit”. We’re told that the Soviet administration “are happy to place [Gagarin’s achievement] at the service of all nations, for the sake of progress, happiness and the good of all people on Earth. We put our achievements and discoveries not at the service of war but at the service of peace and the security of the peoples.”
Yet when Gagarin is asked in a press conference if the flight confirmed his political convictions or the idea “that it is necessary to achieve total and controlled disarmament”, he tactfully demurs. “I cannot put it so well and vividly as Academician Fyodorov did. I think he gave a complete answer to this question.” In fact, YK Fyodorov’s statement – included in the booklet – makes no mention of disarmament. 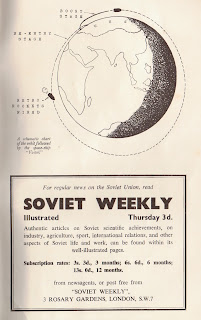 At all times, the accounts are strictly positive. The foreword lists the three and a half year record of Soviet space research, from the launch of the unmanned satellite Sputnik I on 4 October 1957, followed by more and bigger satellites, then rockets sent to the Moon, the Sun and Venus, and the first animals sent into space, culminating in the first manned spaceflight.
On 2 January 1959 it says that “the Soviet probing of space entered a new period with the first cosmic rocket, which hurtled out past the Moon into orbit round the Sun”. Tellingly, it doesn’t name this rocket – because Luna 1 was meant to impact on the Moon but an error in the timing of its upper stage burn during launch meant it missed its target. Instead, says the booklet, “the first Moon rocket” was launched on 12 September, and “hit the Moon, precisely as planned.”
Though the propaganda is wearing, the booklet is peppered with interesting detail. There was no camera on board Gagarin’s spacecraft – something that seems unthinkable now. At times Gagarin struggles to adequately describe the view of Earth from space. He talks of the brightness of the colours, and how quickly he passed in and out of shadow.
We’re told that the Russians were confident of the success of the mission or they would not have sent Gagarin – as he had a wife and young children. We learn that as he descended back to Earth he sang the song, “My country hears, the country knows”. On landing he reported “I feel well and have no injuries or bruises”. He hoped next to travel to “Venus and see what is concealed below its clouds, [or] to go to Mars and see for myself whether it has any canals or not.”

There’s something of Gagarin’s personality, too – his “mildness and modesty”, the books he likes to read, comments from his brother, his cousin and teachers. There are pictures of his wife and children, as well as Gagarin meeting dignitaries and surrounded by crowds. In response to American claims that he was related to royalty, Gagarin insists, “My parents were poor peasants before the Revolution … there were never any princes in our family.”
There’s something endearing in the way Nikita Khrushchov (sic), First Secretary of the Communist Party of the Soviet Union, signs off a telegram to Gagarin, congratulating him on the success of his mission: “Here is a big hug till we meet shortly in Moscow.”
That gregariousness is extended to the Soviets’ rivals, too. Gagarin is asked about American plans to send people into space. “Of course, we shall be glad of the success of American astronauts when they travel up. There is room enough for all in outer space. But that arena should be used for peaceful purposes, not for military aims. American astronauts will have to catch up with us. We shall hail their achievements but we shall always try to keep ahead.”
The Americans took on that challenge. NASA astronaut Alan Shepard became the second man in space on 5 May 1961. Then on 25 May, President Kennedy told Congress of his plan to not merely catch up with the Soviets in space but overtake them, too. He pledged that the US would land a man on the Moon – and return him safely to the Earth – by the end of the decade.
Gagarin didn’t live to see that pledge fulfilled. Tucked into the back of the booklet is a yellowing scrap of paper, torn from the Daily Mail of 29 March 1968. “Yuri, the family man – to two little girls, he was just Daddy” is the headline at the top of page 2, with a photograph of Gagarin being kissed by Yelena (9) and Galya (6). “Yuri Gagarin, who was killed yesterday [in an accident on a training flight], was only 34. But he conquered more than space. His boyish grin and friendly manner won the affection of the world.”
Simon Guerrier is the co-author of The Scientific Secrets of Doctor Who.