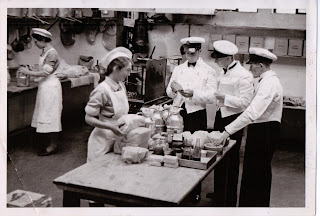 In the 1930s, responsibility for the comfort and enjoyment of passengers on the Silver Wing Imperial Airways flights from Croydon to Paris rested squarely on the shoulders of the two stewards. Dressed in their blue trousers, white jackets and peaked caps, they were the efficient and smart face of Imperial Airways. The rule book described their job as requiring good manners, tact, a sense of humour, unlimited patience and above all, imagination, ‘which is the power of anticipating passengers’ wants and supplying them before they are expressed’. Their appearance was expected to be immaculate. Another quote from the rule book observes, ‘a wilting collar will do much to take the crispness out of a salad’!
There was no room or time for apprenticeships or training on the flights. Stewards came to the airline from considerable previous experience on cruisers or pullman trains. Advertisements appeared in society magazines such as Tatler and at least one man was recruited directly because his service on a train had been so impressive. Obviously, they needed to enjoy travel and not suffer from travel sickness. They were also expected to have a working knowledge of one or two other languages. 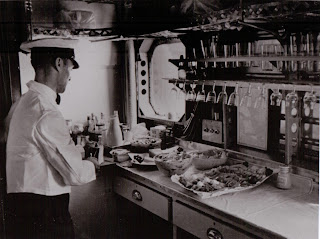 Two hours before a flight, stewards had to check passenger numbers, special dietary requirements, physical problems (and even note celebrities who would be travelling) before going to the kitchens to help prepare and then collect the food required for the flight. After some experimentation in the early thirties, a system was devised for hot food to be packed in airtight aluminium containers lined with asbestos. These slotted into a drawer system specially constructed for the purpose on the aircraft. A plane flying to Paris with about twenty passengers would carry a couple of chickens, four pounds of beef, three pounds each of ham and tongue, two large loaves, besides a liberal quantity of soup, fruit, vegetables, sweets, cheese and biscuits. There were also special thermos containers for tea, coffee and hot milk.
Before each flight, they also had to check on-board provisions such as sugar biscuits, chocolate and Bovril and restock where necessary. The quantity of alcohol consumed at the bar on the previous flight also had to be calculated and Customs informed. On board, the stewards worked from a cramped pantry with a small supply of running water. It was expected that they would have washed up before the plane landed as well as supplying passengers with stationery, maps and magazines when they were summoned by service bells.
Stewards always addressed each other formally and never sat down during the flight. The journey was only just over two hours so meal service had to be streamlined and super-efficient. Having welcomed the passengers on board and shown them to their seats, they began to take orders for food and drink as the plane taxied along the runway. There were no rules about being seated for landing and take-off for the staff. The whole journey must have been one of exhausting activity for them.
Tips were important to them as their basic wage was only £2 10s. to £3 per week, though there was a perk of travel at ten percent of cost for them and their immediate families. Stewards really seemed to enjoy being a valued member of an elite team and the opportunity to mix with and serve the rich and famous.
Cheryl Bailey