Share on facebook
Facebook
Share on twitter
Twitter
Share on linkedin
LinkedIn
Bill O’Neill continues his piece on tha National Aircraft Factory No. 1 at Croydon here:
NAF No1
The building of the factory nearly didn’t happen, at least not in Waddon. Originally, the proposed site was Watford, but this was not approved by the Air Ministry. Waddon was preferred because it provided:
Cubbitts were unique in that they were engaged to both build and run NAF No1, despite having no experience in either airframes or managing production. Their remit was to:
Their first orders from the Air Ministry were for the De Havilland DH9 bomber and for interrupter (C.C.) gears (which allowed forward-firing machine-guns to shoot through the arc of the propeller). The expectation was that the factory would produce 40-60 air frames plus spares and 600 interrupter gears per week.
Construction of the factory began on 29th September 1917, but was delayed due to shortage of steel and extreme bad weather. It was completed on 18th July 1918, but was sufficiently complete to deliver its first plane in March.
The factory employed 2,500-3,000 staff, about half the number expected, of which 50% were women, who were not just responsible for ‘stitching and doping’ the canvas that made up the wings, but were operating machine tools and involved in the final aircraft assembly.
Health and welfare of workers in Waddon was better than most of the national factories. There was a doctor and medical bay on site and the varnishing and doping shops were well-ventilated. The government stopped short, however, of building a proposed air-raid and sports ground!
Choosing the DH9, allowed the factory to use the designs and new production methods pioneered elsewhere by Airco. 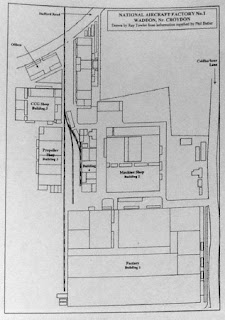 The Great and the Good
In 1918, the newly completed factory was visited by a delegation from parliament and the heads of dominions. The hand-written note below provides a snapshot of this visit, conveniently summarising, key dates, vital statistics and showing a schematic of the site.
After the War
At the end of the war, all outstanding orders were cancelled. Production at the factory continued into the first few months of 1919, by which time the factory had produced 241 DC9s and 3000 interrupters.
On the 11th January 1919 the factory was handed over to the Ministry of Munitions Salvage Department to become a salvage depot for surplus aircraft and equipment. 1500 staff were laid off and the remaining 600 put on reduced wages.
The factory then became a salvage depot, responsible for dismantling and storage of surplus aircraft and in 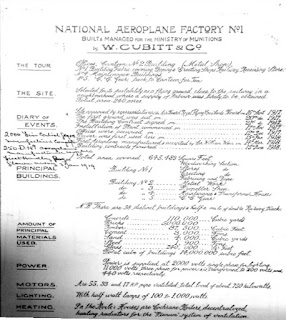 1920 it was sold to the National Aircraft Disposal Company (Airdisco). Owned by Handley Page, Airdisco had been set up to refurbish surplus aircraft and sell them to all-comers. Mainly, they were sold to overseas governments.

Airdisco continued to operate until December 1927, with the NAF 1 site operating a storage location for many hundreds of disassembled aircraft, engines and equipment, with a working area near the airfield for refurbishing aircraft in flyable condition.
In June 1927, part of the erection shop nearest to the Airfield was turned over to the Air Ministry, and in January 1929, the whole of the site was transferred to Air Ministry ownership.
Footnote
Although the government did succeed in increasing air craft production from 1200 aircraft per month in 1917 to 2600 per month by the end of the war, the major contributors to the increase in production were the smaller independent suppliers.
National Aircraft Factory No1 only contributed about 35-40 air frames per month or about 2% of the total. The speed at which the factory was built and brought into production (24 weeks) is impressive and by all accounts it was state of the art bringing all the aircraft-building operations under one roof, but its operation was another matter.
During its short life, the factory was beset with labour issues. Sourcing of staff was less of a problem than in the other NAFs but unrest was and strikes were not uncommon. In May 1918, a strike by electricians not under management control led to deliberate damage of power plant. The new working methods brought disputes over dilution of labour (deskilling) and bonus payments.
In addition, relations with the ministry were difficult. The government saw Cubitt’s management as inexperienced and weak in dealing with the labour issues. The new contractors were not familiar with dealing with the ministry and its regulations and disputes over funding and ordering of plant and equipment were not infrequent. There was no effective ministry control until well into 1918.

Criticising after the event is always easy. In 1917 no-one knew when the war would end, or could be sure of ultimate victory. It was expected that the war would continue into 1919 or even 1920. Given time it is possible that the production issues could have been resolved and the factory could have met its targets.
Bill O’Neill