Living near the Airport: The Aerodrome’s Location 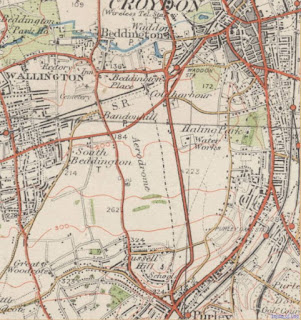 In 1915 a small aerodrome was established at Beddington, one of a ring of such aerodromes built to protect London from Zeppelin raids. In 1918 another small airport, Waddon, was opened on the other side of Plough Lane to be used for test flights from the National Aircraft Factory No1. Plough Lane is the road running north from Russell Hill on this old map (on the left).

After the First World War these two aerodromes were combined (and Plough Lane eventually disappeared – though initially traffic was stopped to allow aircraft to arrive and depart) to become Croydon aerodrome, which opened in 1920. The buildings you can see now were part of a later development and the aerodrome entered a second phase in 1928. 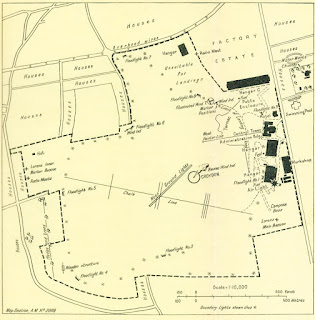 This was quite a constrained site – to the south along Purley Way the land rises steeply to Hillcrest Road, to the East lies Purley Way itself – then and now the major route from London to Brighton, to the North and West there were houses. This can be seen quite clearly in this Air Ministry chart of the aerodrome dating to 1934 (on the right).

As the Aerodrome developed more and more people were drawn to live close by in order to take jobs at the aerodrome or in the adjoining businesses set up to service the aircraft. As the years went by the possibility of further expansion at Croydon became increasingly remote.
The Aerodrome lies across the boundary of what is now the London Boroughs of Sutton and Croydon, though for the whole time the aerodrome was operating it fell within the Municipal Borough of Beddington & Wallington but they had no direct control over the activities at the airport which was under the control of the Air Ministry.
Operations at the Aerodrome
Croydon was not a busy airport by modern standards – in 1936 it had about 50 commercial

flight movements a day (arrivals or departures) whereas Heathrow now has a landing or departure just about every minute. But Croydon operated 24 hours a day with flights arriving and leaving through the night. In addition to the commercial air transport flights Surrey Aviation offered joy rides to all and sundry, pilot Wally Hope ran an Air Taxi service and in the line of hangars at the Northern edge of the aerodrome half a dozen companies offered a range of aviation services including: 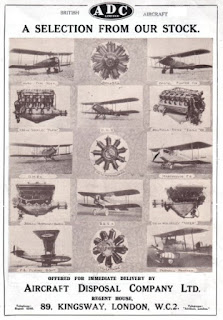 In addition offices accommodated insurance brokers, travel bureaux and all the other paraphernalia that airports attract, and Croydon was also ‘home’ or the final destination for all those adventurous pilots who set out to break records for flying to Australia, from South Africa, across the Atlantic and all the other adventures that could be imagined. The Aerodrome was also a tourist attraction in its own right with vast crowds attending to witness the arrival of stars such as Amy Johnson and a steady stream of visitors paying to enter the viewing areas to see the comings and goings of normal flights and the wealthy people who could afford to fly in them.
In addition to all this activity there were also occasional accidents that either impacted directly

on local residents or added to the general sense of insecurity that arose from having aeroplanes landing, taking off and generally buzzing around. It is easy to imagine that all this busyness and all the noise – aircraft landing and taking off, joyriders circling the airport, engines being tested before flight and by the aircraft manufacturing and servicing companies – the sleep interrupted by night arrivals and departures might lead to a degree of protest.

In 1929 the Air Ministry, acknowledging a number of complaints that had been received ‘regarding low flying in the neighbourhood of Croydon Aerodrome’ reminded pilots of the Notice to Airmen (Number 8 of 1927) which asked them, so far as possible, to avoid flying low over the more densely inhabited 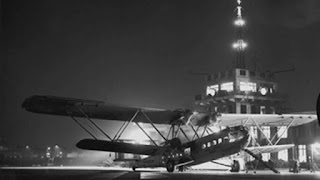 areas around the airport, especially the hill to the South and houses to the North West and West. In the same year the Borough Council held a discussion on the nuisance caused by night flying (see left, the airport at night) and the testing of engines.

In reality there was little the Council could do other than to write themselves to the Air Ministry emphasising the concerns of residents and the local Ratepayers Association. In 1930, having complained about pleasure flights or ‘joy flying’ they were pleased to receive a reply from the Ministry telling them an application from a company to offer ‘joy flights’ at Croydon had been turned down, and repeating that regulations banned stunt or trick flying likely to endanger anyone and that any instance of this should be reported to the Police.
In reality, though, it isn’t possible to operate an airport silently and planes must, necessarily, fly low before landing and immediately after take-off. Flying magazines such as The Aeroplane supported the airport, pointing out that many of the houses had been built since it opened as people working there looked to find homes near their places of work.
It rumbled on though. Complaints were discussed by the Finance & General Purposes Committee of the Borough Council at almost every meeting – low flying was a frequent topic but complaints also covered trick flying, pleasure flying and noise from the aircraft factories but all they could do was pass the complaints on to the Air Ministry. Then in 1932 this all stopped – no more discussion of complaints about the airport. It wasn’t that the noise stopped – we know there were articles in the local magazine Wallington Topics as late as 1938 complaining about low flying, the ‘buzzing’ from pleasure flights on sunny Sundays and night flights. One can only surmise that the Council tired of sending letters to and receiving replies from the Air Ministry but seeing no real improvement they decided simply to forward the complaints without discussion.