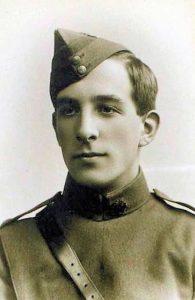 to our attention by Lorraine (one of the project volunteers) as he was local to the airport, had achieved an enormous amount but tragically died when at only 19 years old. Barlow was awarded MC three times. He was nick-named the Gadget King designed and had installed mechanism for firing both guns together with one trigger. He also flew from Beddington (Croydon) airfield on occasions.

More information was then provided about him by his nephew Ian Leonard Stimson who, coincidentally to this project, came to the February Open day at Airport House. Fortunately he got chatting to our volunteer co-ordinator Karen and then emailed details of his uncle afterwards. Ian Leonard Stimson – his middle name is after his heroic uncle – has researched this young pilot for his family history and sent links to more information about him in the squadron history.

Leonard Monteagle Barlow was born on 5 June 1898 and, after schooling at Wallington Modern School and privately, he trained as an electrical engineer at the Finsbury College. He entered the City and Guilds Technical College, Finsbury, with a Mitchell Scholarship, in October 1913, and took a two years’ course in electrical engineering under Professor Silvanus P. Thompson, F.R.S., President, I.E.E., 1899 – 1900. He was awarded the Salomon’s Scholarship in 1915, and acted as Senior Student in 1915-1916, when he was for a time engaged upon research work under the Principal of the College.

Leonard was one of “the first of the few” in the First World War. He was a member of the famous 56th squadron and was picked for the purpose by Major Albert Ball. By May 1917 the Squadron had completed its first seven weeks in France:

During its first five weeks of active fighting it had claimed 57 enemy aeroplanes; 23 of these destroyed and 34 driven down out of control, for the loss of ten of its own pilots.  The Squadron’s apprenticeship was over; it had weathered the crippling losses of May 7 – crippling both in numbers and quality – and was about to enter perhaps its most successful period; a period that would see its fame spread throughout the messes of the RFC and even to ‘the other side of the hill’, into the messes of the German air force. (Revell: 64)

Barlow was involved in a massive offensive against the Germans on 7 June 1917 and sent off a solo mission against the German aerodromes at Bisseghem and Reckem. He reached both aerodromes, diving at the sheds and streaking them with machine gun fire until he was out of ammunition. He avoided the German anti-aircraft artillery and returned safely to base, having made note of what artillery had been used against him. This achievement earned Barlow a well-deserved Military Cross, gazetted on August 25, 1917:

For conspicuous gallantry and devotion to duty in aerial combats.  He has set a very fine example of courage and dash in attacking and destroying hostile machines.  He has also attacked and stopped a goods train, silenced a machine gun on an aerodrome and dispersed troops on roads from a very low altitude.

Barlow would earn another two bars on his medal. Leonard’s younger brother Donald told his children that on one occasion five VCs were staying overnight at their parents’ home. He finished duty in France in October 1917.Leonard Barlow was promoted to Captain on 23 Jan 1918 and appointed as Flight Commander on that date.  He was killed on 5 February 2018 while flight testing a a Sopwith Dolphin C.3779, which broke up in the air at Martlesham Heath. Leonard’s medals were posthumously presented to Leonard and Katharine at a special parade of the Guards Battalions held on 28 September 1918 at Wellington Barracks, London, by General Sir Francis Lloyd K.C.B., C.V.O., D.S.O. who, by Command, represented H.M. the King. Barlow is buried in Wallington (Bandon Hill) Cemetery. 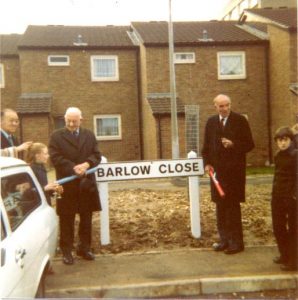 A road on the Roundshaw Estate is named specifically after this local hero, Barlow Close. It will be featured on our Fighting for Air Map of the main areas in Croydon and Sutton affected by the First World War. Ian Stimson provided a photo of the naming of the road with Prof. Harold E M Barlow (left) and Mr Donald S M Barlow (right) (two of Leonard’s younger brothers) standing by the new road name.