Share on facebook
Facebook
Share on twitter
Twitter
Share on linkedin
LinkedIn
A post by U3A member Peter Day on, well, post:
Many people are completely unaware that there was ever an aerodrome/airport at Croydon. That it was, for many years, the only airport for London and the focus of a network of flights that covered not only the UK but a substantial part of the British Empire always takes them by surprise.
In 1936 Croydon Airport saw an average of over 50 aircraft movements (arrivals and departures) every day. That represented just over a quarter of all flights into, away from and across the UK carrying passengers, mail and freight. The next busiest was Speke airport at Liverpool with almost 30 movements a day. 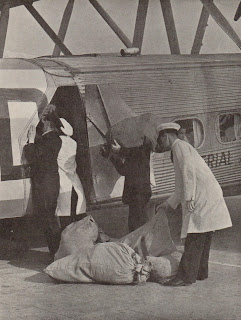 Croydon, however, was clearly the aerodrome of choice for passengers, for mail and for freight.
With a quarter of the flights, Croydon carried just under half the passengers – 131,853 out of a total of 268,448. Portsmouth and Southampton, at about 25,000 passenger movements each, were next busiest – the Imperial Airways Flying Boat service was based at Southampton.
International Air mail was a service created in the late 1920s which grew massively in popularity over the next decade. In 1929 the airlines carried in total some 99 tons of mail, by 1936 that had grown by over 1300% to 1,332 tons – and 62% of it, 832 tons, was despatched and received through Croydon. All those flights into and out of Portsmouth and Southampton carried no mail at all!
But it was in the carriage of cargo that Croydon showed overwhelming popularity. Even the earliest airplanes had

been used to carry freight and there were freight-only flights, just as there are today. In 1925 the total tonnage of cargo was about 550 and that grew steadily over the next decade to about 2,720 tons in 1936. And how much went through Croydon? 2,282 tons – fully 84% of the total.

The odd thing about this dominance, especially with cargo, was the absence of a railway into Croydon airport – all the freight and mail had to be carried by van and lorry, all the passengers by car, taxi and bus.
Peter Day